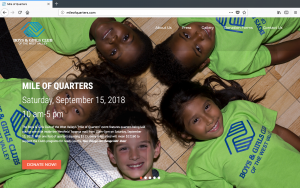 West Valley Boys and Girls Club is an important resource for families in the San Fernando Valley, providing critical support to more than 550 kids and teens each day. To raise money for the Club’s vital arts, sports and academic programming, it established the Mile of Quarters fundraiser, now in its 11th year.

When the Club decided that the fundraiser needed its own website, CEO Tim Blaylock turned to Cloud77 to design and develop it.

As a nonprofit, West Valley Boys and Girls Club has to be very careful with its budget. Most of its funds need to go toward programming  — not marketing. As a community supporter, Cloud77 took on the website pro bono. Still, there was no budget for stock photography or premium themes or plugins, and the time we were able to spend on the project was limited.

It is also important for the website to look good on mobile phones, as the fundraiser’s organizers hope that passersby will access it at the event itself.

Fortunately, the Club had the help of talented photographers who had captured beautiful images of Club members, as well as previous Mile of Quarters fundraisers. Then, we had the simple job of finding a theme that was able to both showcase the photographs and convey the chief Call to Action — asking visitors to donate to this worthy cause.

After a brief survey of themes, we chose STK’s Charity Theme. Not only does it make great use of the Club’s photographs, but it also creates several opportunities for visitors to donate. It is also extremely responsive, and looks great on cell phones and tablets alike.