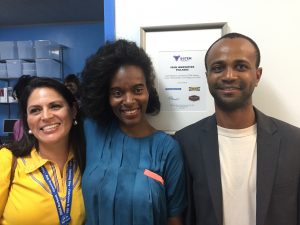 Cloud 77 CEO Adrian Harper poses with B-STEM founder Tracie Ponder (center) and a volunteer from IKEA during the unveiling of the West Valley Boys and Girls Club’s Tech Innovation Village.

It’s always satisfying to see a project you’ve been involved with come to fruition, but witnessing the unveiling of B-STEM’s Tech Innovation Village at the West Valley Boys and Girls Club was extra special. Not only was the end result beautiful, but it also was on behalf of a great cause. The Boys and Girls Clubs of America are a key factor in the success of children across the nation, and the local chapter in Canoga Park is no exception. It is such a pleasure to be able to support an institution so effective in promoting student leadership and scholarship, as well as the arts, sports and health.

B-STEM Project’s Tech Innovation Villages are tech-driven spaces designed or re-designed to help non-profit organizations bring technology to kids in low-income communities. B-STEM teamed up with Cloud 77, IKEA, Dunn-Edwards, and The Container Store to refurbish two rooms at the West Valley club: its Learning Center and Robotics Room. Volunteers cleared out, repainted and reorganized the rooms to create bright, beautiful, and orderly spaces for children to investigate science and technology. While IKEA donated the furniture, Dunn-Edwards the paint, and The Container Store the shelving and storage containers, Cloud 77 provided refurbished computers to help bridge the technology gap that many low-income children face. 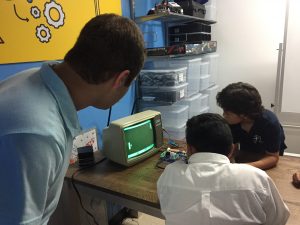 WVBGC members play a game of Pong in the newly refurbished Robotics Room.

At the unveiling on May 24, CEO Adrian Harper was invited to say a few words:

It is such a pleasure to work with [B-Stem Founder] Tracie [Dean Ponder]. I recall, it was a little over a year ago when we met and over coffee, and we talked about this idea of donating computers to those who could benefit the most from it. Here, it is now a reality. So it’s very exciting to be part of this process and see this happen firsthand. Kids, we want you to to be sure to take advantage of the technology that you have. Work hard, focus, study, so that someday you can chase your dreams and so that whatever you want to be, you can be. … To you professionals, the people who are actually volunteering, giving your time and service to this, we want to acknowledge, honor and thank you for doing this. It is such a special thing.”

Cloud 77 was honored to be able to participate in this project, and we look forward to being able to help more in the future.